What Happens When We Die 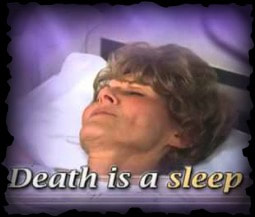 Well Paul said it best……..  You are a Sleep!
Notice the apostle Paul’s comforting instruction to the believers:
But I would not have you to be ignorant, brethren, concerning them which are asleep, that ye sorrow not, even as others which have no hope. 14 For if we believe that Yeshua died and rose again, even so them also which sleeps in Yeshua will Adonai bring with him. (1 Thessalonians 4:13-14).

Likewise Job also said it best………….  11  “If I had been stillborn, if I had died at birth,  12  had there been no knees to receive me or breasts for me to suck.  13  Then I would be lying still and in peace, I would have slept and been at rest, Job 3:11-13
Now for many Followers who believe that Followers who have passed away are in Heaven,
Yeshua also proved that they are not in Heaven!   And no man hath ascended up to heaven, but he that came down from heaven, even the Son of man which is in heaven. John 3:1
Here is a little more proof:  15  For this we say unto you by the word of the Lord, that we which are alive and remain unto the coming of the Lord shall not prevent them which are asleep.
16  For the Lord himself shall descend from heaven with a shout, with the voice of the archangel, and with the trump of Adonai: and the dead in Yeshua shall rise first (1 Thessalonians 4:15-16).
Now understand, If someone that is dead is already in Heaven, than why would there be a need for the dead to rise when Yeshua descends down from Heaven?
You can also see it here, John 6:39-40: “This is the will of the Father who sent Me, that of all He has given Me I should lose nothing, but should raise it up at the last day. And this is the will of Him who sent Me, that everyone who sees the Son and believes in Him may have everlasting life; and I will raise him up at the last day.”
For two more reference points  on the subject: “When you die you are a sleep until Yeshua returns and raises you”,
please see Daniel 12:2 And many of them that sleep in the dust of the earth shall awake, some to everlasting life, and some to shame and everlasting contempt.
Last but not least please also see,
Revelation 6:9-11
9 And when he had opened the fifth seal, I saw under the altar the souls of them that were slain for the word of Adonai, and for the testimony which they held:
10 And they cried with a loud voice, saying, How long, O Lord, holy and true, dost thou not judge and avenge our blood on them that dwell on the earth?
11 And white robes were given unto every one of them; and it was said unto them, that they should  rest  yet for a little season, until their fellow servants also and their brethren, that should be killed as they were, should be fulfilled.
You can clearly see here that Yeshua told them to continue resting and/or sleep a little while longer!!!!!